According to the Gospel of Luke, the miraculous catch of fish preceded the calling of Peter. This event at the Lake of Galilee gives us an answer to two questions. What does acting in faith mean? And what is the fruit of an act of faith? The evangelist tells us the following: At the Lake of Galilee Jesus taught the people from the boat belonging to Simon Peter. After his discourse He said to Simon: "Put out into the deep, and let down your nets for a catch. And Simon answered, 'Master, we have toiled all the night and took nothing!'" (Luke 5:4b-5a). Peter, who had years of experience with fishing, faced a dilemma, a challenge. What to do with this instruction of Jesus? A carpenter gave an experienced fisherman a command that is totally at odds with his professional experience. During the night there was a much greater prospect of a good catch. If one did not catch anything during the night, the chances of a good catch during the day even smaller. Moreover, Peter was dead tired after a night of fruitless work. On the other hand, he admired Jesus. He had heard his impressive sermon in Capharnaum (Luke 4:31-32) and he had been witness to the miraculous healing of his mother-in-law and of other sick and possessed people (Luke 4:33-41).

At that moment Peter was inwardly tense. On the one hand, there were his sober considerations and thoughts as a fisherman. On the other hand, there was his affection and admiration for Jesus. For him, the instructions from this impressive man from Nazareth, himself not a fisherman, were totally unexpected. Peter loved Jesus. He had esteem for him. He always addressed him as ‘Master'. Therefore in his spontaneous nature he added immediately: "But at your word I will let down the nets." (Luke 5:5b). And so he did.

Peter did an act of faith which, seen from a purely human point of view, contradicted his professional experience as a fisherman. He went along with and was obedient to the word of the Lord and did not react to the Lord's invitation with words such as 'if' and 'but'. Magnanimously he put aside each excuse that came to mind on the basis of his thinking, his feelings and his experience. It was a conquest of self which exceed the natural limits of his person.  By following Jesus' instructions, he acted supernaturally. Peter proved at that moment that he did not want to remain only an admirer of Jesus. He showed that he was also prepared to obey him with a loving faith. He disregarded his own ego and refrained from doing only what he could understand. He made his own purely human truth subordinate to the divine Truth and Will.

Here Peter shows us the content of an act of faith. An act of faith consists, in its essence, not in religious feelings or thoughts, but in an act which exceeds and transcends human limitations. Religious feelings may accompany our life of faith and religious thoughts may bring us closer to the world of faith, but to be able to get to know God, step by step, in his majesty and glory, it is necessary to act in faith. The same is necessary in order to understand his Truth and his Love, as well as to get to know his Will. Jesus asked of Peter a pure act of faith, an act which does not worry and does not analyze people and situations according to its own personal insights. It has to be an act of faith in love and confidence, which is at the same time submissive to the will of God.

Luke tells us how such acts of faith are richly rewarded. "And when they had done this, they enclosed a great shoal of fish, and as their nets were breaking, they beckoned to their partners in the other boat to come and help them. And they came and filled both the boats, so that they began to sink." (Luke 5:6-7). When the Lord does something, He doesn't do it half-way. Peter and the other apostles could experience the joy and astonishment which everyone has who is willing to do acts of faith. All expectations had been exceeded. The nets started to break and the boats almost sank under the load. As the best teacher and exceptional knower of the human heart, Jesus knew how to best deal with the fisherman from Galilee.  The overflowing net made a deep impression on Peter. "For he was astonished, and all that were with him, at the catch of fish which they had taken..." (Luke 5:9). The Lord makes his divine power clear to Peter in a new and unexpected way.  Despite the apparently senseless casting of the nets, Peter's act of faith was richly rewarded. 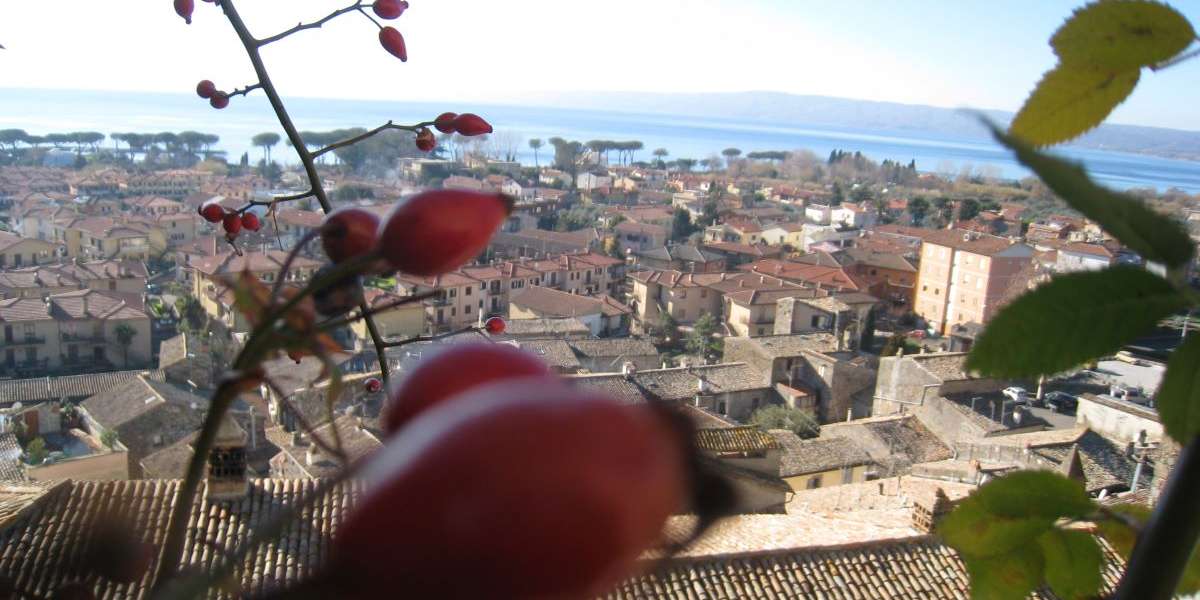 Now we could have expected that Peter would express with enthusiasm his admiration about the miracle of Jesus, but Peter "fell down at Jesus' knees, saying, 'Depart from me, for I am a sinful man, O Lord'" (Luke 5:8). Why at this moment a repentant acknowledging of his guilt? Why does Peter reject Jesus with the words, "Depart from me, for I am a sinful man." (Luke 5:8)? Why instead of words of thanksgiving, does he have this submissive attitude? At that moment something wonderful happened in Peter's soul. Because he was obedient in faith, Peter not only received an abundantly filled net, but also a penetrating light which illumined his soul. While he and his companions struggled to pull the overflowing nets on shore, his heart was filled at one and the same time with the greatness of Jesus, his beloved Lord and  with a keen knowledge of himself.  Loving obedience is guaranteed to bring a better knowledge of God and at the same time of deeper knowledge of self. Peter came to a greater awareness of his own sinfulness. His kneeling down and his speaking became signs of the subservience of his spirit. Being struck in his thinking by a divine light, he submitted himself in adoration to the Lord and recognized the sinfulness of his own person. He saw that his knowledge and ability were nothing in comparison with the divine power of the Lord.
Jesus knew now that the time had come in which He could say: "Do not be afraid; henceforth you will be catching men." (Luke 5:10b).  Jesus' answer came unexpectedly. He accepted the humble confession of Peter. He gave him no time to think long about himself, but He entrusted to him a new and unexplained task, according to the eternal plan of his Heavenly Father. Without delay and without protesting with the words, "I am not worthy", Peter, and with him James and John, accepted in faith the new task given them by Jesus; "And when they had brought their boats to land, they left everything and followed him" (Luke 5:11).
»The Lord makes us capable of fulfilling the works of faith. He gives us the strength to act and to serve with a love which is permeated with his mercy. As children of God this love will help us to radiate simultaneously the joy and the courage of the redeemed. In faith we have to testify to the power of grace which we carry within us.«
Mother Julia 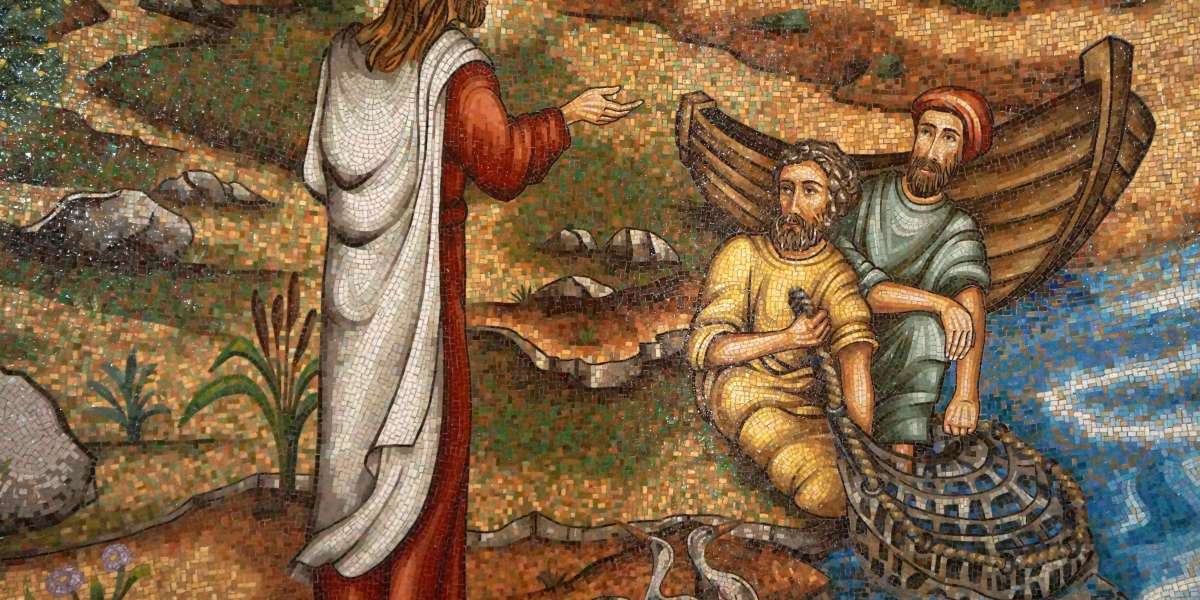 Mosaic in the Church of St. Peter, Capharnaum